Patients with Exchange Plans Pay 2x Out Of Pocket for Rx

WASHINGTON, D.C. (May 15, 2014) — A new report by Milliman, Inc. finds that Silver plans with combined deductibles offered through the Health Insurance Exchanges may require patients to pay more than twice as much out of pocket for prescription medicines overall as they would under a typical employer plan. This is a far larger increase in out-of-pocket costs than was found for other medical care. 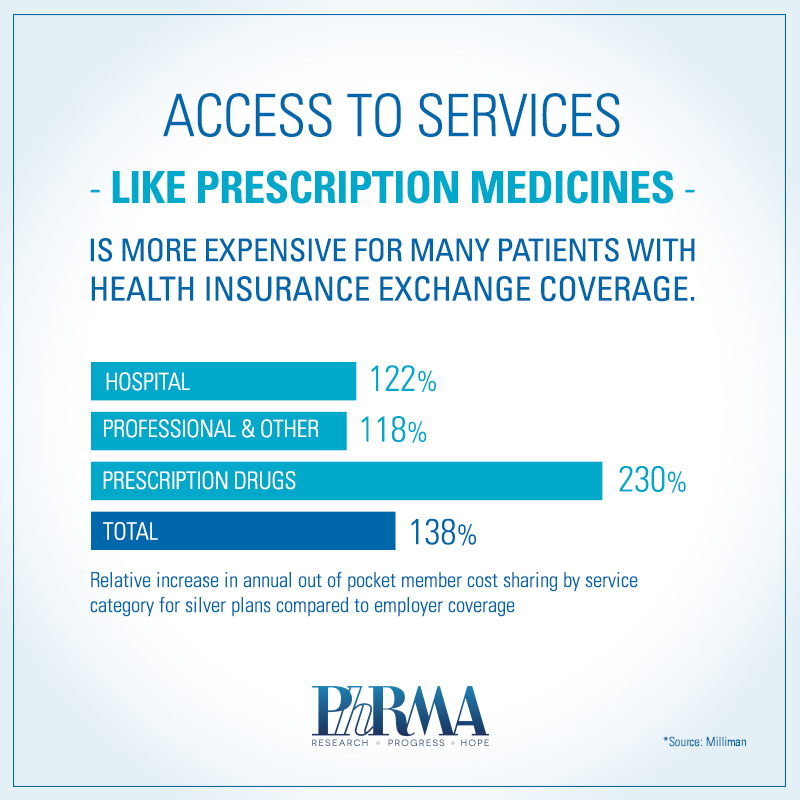 The report, commissioned by the Pharmaceutical Research and Manufacturers of America (PhRMA), analyzed the differences between common health care benefit designs offered to individuals through the Exchanges and typical employer-sponsored plans.

With combined deductible plans, patients are responsible for 100 percent of their non-preventive medical and pharmacy costs before meeting the deductible. The findings reveal that the large combined deductibles for all medical spending that are common in Silver plans in Exchanges may disproportionately impact out-of-pocket costs for patients relying on prescription medicines. The report looks at Silver plans because they were the most popular in the enrollment period that ended March 31, 2014.

“Americans participating in the Exchanges were promised coverage comparable to employer plans and yet the reality is that many new plans are failing to provide an appropriate level of access to quality, affordable health care,” said John Castellani, President and CEO of PhRMA. “Patients face hurdles in accessing the medicines they need to manage their conditions, which is particularly problematic for Americans trying to control their chronic diseases.”

The Milliman report also noted that Silver plans are nearly four times more likely to have a single combined deductible for medical and pharmacy benefits (46 percent of the time) compared to typical employer-sponsored plans (12 percent of the time). This is an important distinction, particularly for patients with chronic illnesses, as it means prescription medicines are not covered until patients meet the deductible. According to Milliman’s analysis, the typical deductible for Silver plans is $2,000. Previous research from Avalere Health found that in the lower-cost Bronze plans, deductibles are even higher, averaging more than $4,000. 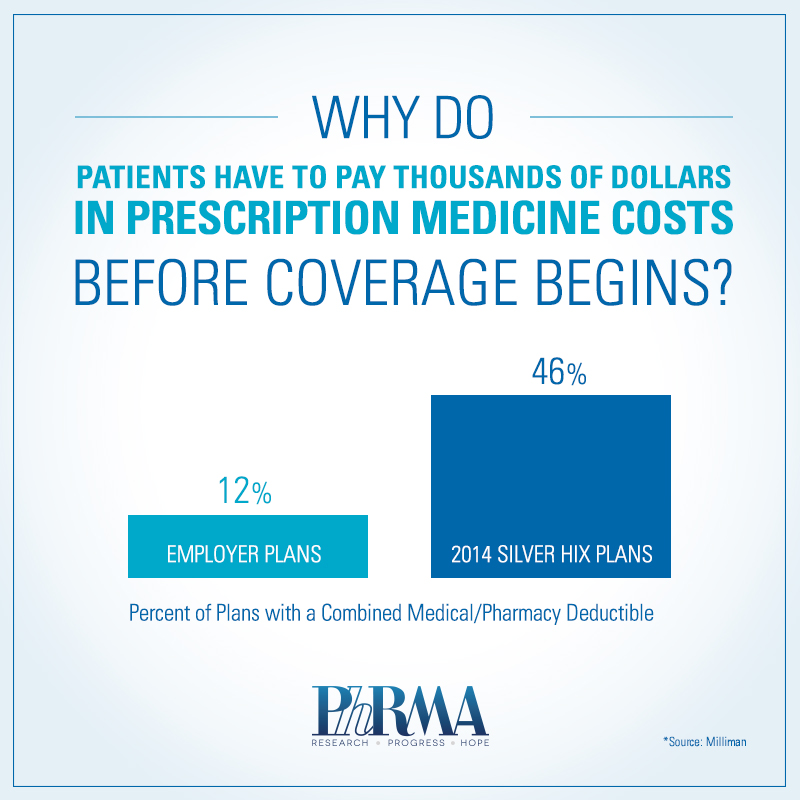 Further, the report concludes that Silver plans with combined deductibles impose 130 percent higher cost sharing for prescription medicine than typical employer-sponsored plans, compared to about a 20 percent increase for other health care services for members without subsidies that previously had typical employer coverage.

Studies have found that higher out-of-pocket costs reduce patients’ likelihood of taking prescription medicines to manage chronic conditions. The result is an increase in hospitalizations and higher health care costs overall. Conversely, programs that encourage better adherence have the potential to reduce emergency department visits, hospitalizations, and other preventable, costly care. In fact, according to a 2012 Health Affairs study, improved medication adherence for patients with diabetes has the potential to save $8.3 billion each year.

“Medicines are one of the most significant contributors to improved quality and length of life for people with serious diseases, such as chronic illnesses, cancer, and HIV/AIDS,” said Castellani. “To improve health and, in turn, control health care costs, we must continue to work toward a health care system that improves access and adherence to medicines.”

Data from the Kaiser Family Foundation and Health Research and Educational Trust Employer Health Benefits 2013 Annual Survey and www.healthcare.gov were used to develop typical plan designs. A typical Silver plan, reflective of the median or average benefit plan provisions for each type of plan referenced in the study, was developed by Milliman for this analysis. A mix of medians and averages (means) were used to ensure that the overall plan design met the actuarial value requirement for a Silver plan.

The Silver plan designs were run through the final 2015 AV Calculator, released by the Centers for Medicare and Medicaid Services (CMS) on March 4, 2014, to ensure the designs met the requirements of being a Qualified Silver plan.  Milliman’s proprietary Claims Simulation Model was then used to calculate the actuarial value amounts and member cost sharing percentages that were used in the remainder of the analysis.

About PhRMA The Pharmaceutical Research and Manufacturers of America (PhRMA) represents the country’s leading innovative biopharmaceutical research and biotechnology companies, which are devoted to discovering and developing medicines that enable patients to live longer, healthier, and more productive lives. Since 2000, PhRMA member companies have invested more than $550 billion in the search for new treatments and cures, including an estimated $51.1 billion in 2013 alone.

About Milliman Milliman is among the world’s largest providers of actuarial and related products and services. The firm has consulting practices in healthcare, property & casualty insurance, life insurance and financial services, and employee benefits. Founded in 1947, Milliman is an independent firm with offices in major cities around the globe. For further information, visit www.milliman.com.